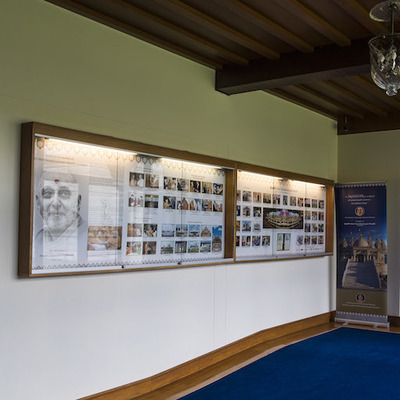 On the left of the display, you will see some of the many important people from around the world who have visited the Mandir, inspired by its community spirit and the beauty of its architecture and message. These have included community and religious leaders, the royal family, and many others. The Mandir is also visited throughout the year by thousands of tourists like yourself, and by hundreds of school groups seeking to learn more about Hinduism.

In the centre, you can see a wide photo of the ‘annakut’, one of the largest devotional offerings of food in the world. It is offered to the deities in thanksgiving and prayer, to mark the beginning of every Hindu New Year.

Below this, you can see two certificates from Guinness World Records. One recognised BAPS Shri Swaminarayan Mandir as the largest traditional Hindu mandir to be built outside of India. The other was awarded to His Holiness Pramukh Swami Maharaj for consecrating the most Hindu temples in the world.

Towards the far end of the display, you can see some of the various religious, cultural and charitable activities of the Mandir. As envisioned by His Holiness Pramukh Swami Maharaj, the Mandir serves as a hub of community outreach, serving the young and old, families, and especially those less fortunate than us. Over the years, the Mandir has partnered with a variety of national and local charities to support these worthy causes – such as Age UK, Alzheimer’s Society, the Anthony Nolan Trust, Barnardo’s, BBC Children in Need, Breast Cancer Care, the British Heart Foundation, Carers UK, Diabetes UK, KIDS, Macmillan Cancer Support, and several others.

When you are ready, please move forward through the walkway into the marbled area and then press next. Please remember that you are now entering a quiet zone.