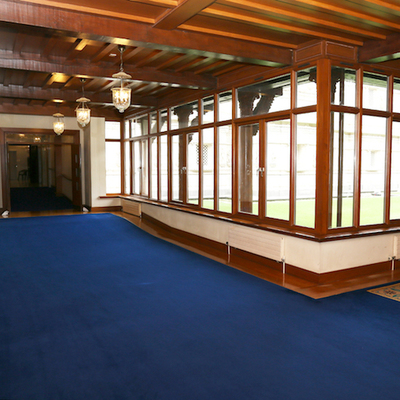 Please take a moment to stop and enjoy the view from the windows on your right as you learn a little more about the Mandir.

This Mandir was inaugurated by His Holiness Pramukh Swami Maharaj on 20 August 1995.

The design of the Mandir is based on the ancient Hindu scriptures of architecture known as the Shilpashastra.

Notice, for example, the frieze of patterned carvings along the wall and how it is intermittently embellished with figures of celestial beings and the decorated windows and balconies.

The Mandir symbolises nature in all its glory. The spires that rise majestically to reach out for the skies represent mountain peaks. The dome represents the cosmos – the ultimate creation of God. The fluttering flags remind us that air is vital for life; their white and red stripes signify purity and devotion. And the moat that surrounds the Mandir signifies water as the nectar of life.

God is eternal so the house of God is made to last. This is why the Mandir has been built from solid natural stone with no structural steel. Without corrosion, the Mandir can last a thousand years, just like the ancient structures in India that have survived the ravages of time.

But while being built according to ancient scriptural prescriptions, the Mandir also had to meet modern building codes. This was another challenge, alongside choosing the right materials to suit the variable British weather.

For the exterior, Bulgarian limestone was chosen, while the interior of the Mandir is made from Italian and Indian marble.

Almost 3,000 tonnes of Bulgarian limestone was shipped 3,900 miles to India. 1,200 tonnes of Italian Carrara marble made its own journey of 4,800 miles. With a further 900 tonnes of Indian Ambaji marble, the over 5,000 tonnes of stone was hand-carved in India into 26,300 carved pieces – the largest weighing 5.6 tonnes and the smallest just 50 grams. These pieces were then coded, packed and sent on their final 6,300-mile journey to London, where they were assembled like a giant 3-dimensional jigsaw, all in the space of only two and a half years.

At the peak of construction, over 1,500 [15 hundred] skilled artisans were working at 14 different sites in India, whilst a dedicated team of volunteers in London worked around the clock to polish and assemble the stones. The whole Mandir is a labour of love, created and maintained by volunteers.

When you are ready, please turn to the left side of the Photo Display behind you and then press next.