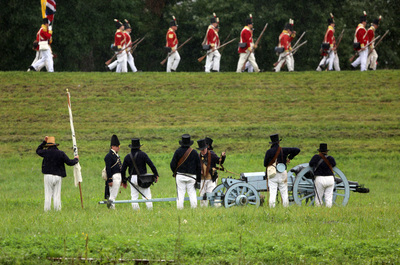 The day hung in the balance, Ross and Cockburn, who earlier thought the battle won, rushed forward to the line.  The scorching day had reached 100 degrees, three men collapsed and died from heatstroke while climbing the one hundred feet of elevation from the river to Barney’s position.  But the arrival of British reinforcements lent critical support to the assault.

Ross took personal command of Thornton’s brigade, renewing the advance and blunting of the U.S. Marine’s charge.  The shock of the American assault had worn off, and there were not enough marines and flotillamen to sustain it.  The American pulled back under heavy fire from British sharpshooters.  Captain Miller, the Marine commander, found himself in an impromptu duel with an enemy assailant.  Each man leveled his musket, fired, and missed, but the British soldier was able to reload and fire again while Miller fixed his flint, shattering the captain’s arm.

As Ross directed his troops forward, a burst of Barney’s grapeshot killed his horse, throwing the general to the ground. Ross was uninjured, through a later inspection found four musket ball holes in different parts of his clothing.

On Barney’s left, the District militia troops came under attack.  Troops were called to bolster the line.  Just then, they received orders from Winder to retreat.  Angry protests erupted from the men, many of whom had yet to fire a shot.  “Victory was doubtful, but we did not cease to expect, until we were ordered to retreat, nobody near us could tell why,” said a soldier in Captain Davidson’s infantry company.

The U.S. regulars were returning fire when Winder rode up and ordered them to retreat.  When an officer protested, WInder angrily repeated his order.

With the British closing on both flanks, WInder likewise aborted an attempt by the District militia to hold, directing them to instead make a stand on the heights of Washington.  Peter and the Georgetown Artillery skillfully covered the retreat, and the District militia pulled back in relatively good order.  Winder did not bother sending word to Barney that he was retreating.  The commodore was infuriated, if not particularly surprised, to see he had been abandoned.

As Barney stood by the guns, a musket ball slammed into his thigh.  The commodore stayed on his feet and told no one, not wanting to alarm the men.  But his situation was desperate.  The gun batteries were out of ammunition and could not be replenished.  The ammunition wagon drivers - civilian hires -had fled.  Dozens of his men were dead or wounded and he was nearly surrounded.  Barney ordered the guns spiked and his men to retreat.

Loss of blood soon made it impossible for Barney to disguise the severity of his wound.  He was faint and could scarcely hold up his head.  Three officers tried to carry the commodore, but he was so weak they put him down.  Barney ordered them away, but Sailing Master Jesse Huffington stayed, tending Barney’s wound.