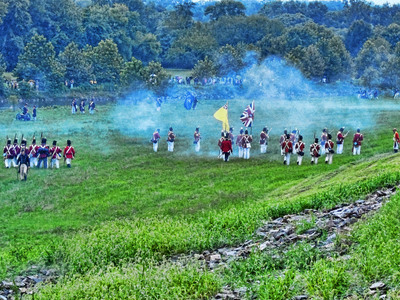 American Stand at the Third Line

Colonel Thornton led a second British charge, and the men ran again headlong at Barney’s guns.  Grape and canister shot mowed down almost every man on the road. The British were caught in a murderous crossfire between Major Peter’s Georgetown rapid-firing six-pounders and Barney’s big guns, the heaviest artillery fire that Thornton  had ever experienced.  “Whole companies were cut down to a man as they approached our lines,” recalled Bacon, the marine quartermaster.

Thornton had no taste for another direct onslaught at the guns, and instead attacked Barney’s right flank.  The British colonel rode along the bottom of the ravine, protected from American fire.  After a short distance, Thornton dismounted and led a charge across an open field toward Barney’s guns, five hundred yards up the hill.

Barney saw his opening.  He ordered his infantry - Captain Miller’s marines and the spare flotillamen - to charge the British line.  At the same time, the commodore oured destructive grape and canister shot on the British flank.  Thornton was still running, sword in the air, and was within fifty yards of Barney’s position, when a musket ball tore into his upper thigh, splintering the bone.  He tumbled to the ground, where he was further peppered by grapeshot.  Without the fearless Thornton at its head, the British charge lost all momentum.

Cutlasses raised, the charging marines and seamen took the British utterly by surprise.  “Board ‘em!” the sailors cried.  The American drove the British back two hundred yards into the woods.  Thornton lay on the ground grievously wounded as Barney’s men passed close by, then he rolled unnoticed down the ravine, hoping to escape.

The British tried to rally, but the ravine had turned into a killing field.  American Major Peter thought he moment right for a counterattack that would devastate the British and carry the day for the Americans.  “There was a sufficient number of troops in the rear of my guns...to have repulsed the enemy,” Peter later wrote, “killed and crippled as they were at that moment.”

But General Winder had already decided to retreat.  He knew nothing of the devastating crossfire laid on the British by the guns of Barney and Peter, or the shocking repulse of the British troops by the marines and flotillamen.  Nor did he know that the District militia were standing firm on the third line, as were the U.S. regulars and Beall’s Annapolis militia.  He intended to form a new line of defense somewhere between Bladensburg and the Capitol.