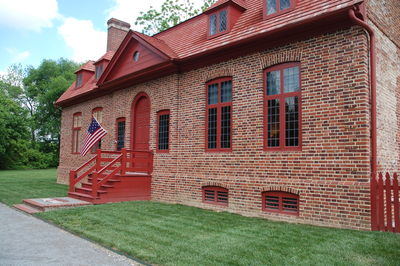 At his headquarters at the home of Dr. Beanes, the British commander convened a council of war to decide whether to attack Washington or retreat to the ships at Benedict on the Patuxent River.  In many respects, the British found themselves in a strong position.  The Troops were in better shape than when they landed at Benedict four days earlier, and they were now in striking distance of the American capital.  Slaves were a font of useful information, and for that matter, “the white inhabitants by no means incorruptible.” However, the small expeditionary force was now twenty-five miles from the ships at Benedict, with little artillery and no cavalry.  Unit now, the army had been moving alongside or at least close to the river.  From here on, attack on Washington would take the army inland, away from communication with the ships.

As the council of war continued, Rear Admiral Cockburn was summoned from Mount Calvert, a brick plantation overlooking the Patuxent.  Arriving at the Beanes home, Cockburn went to work.  The Americans truly were as weak as they seemed.  Cockburn offered to bolster Ross’ force with Royal Marine artillery and seamen to carry provisions.  Ross was soon persuaded.  Cockburn immediately issued orders for a force of 350 men, including sailors, the Colonial Marines, and Royal Marine rocket brigade to march from Mount Calvert and join the Army.

The Corps of Colonial Marines were a new fighting force of escaped slaves.  Cockburn had distributed a thousand copies of a  proclamation inviting slaves in the Chesapeake region to join with the British, either to fight against their former masters or to settle in Canada or the West Indies.  At night, British barges went to prearranged meeting spots to pick up slaves willing to join.  In one night, more than 140 slaves escaped.  It was a perilous venture for the slaves - if caught, they risked execution or being sold out of state.  Others likely perished when their canoes or rafts drifted to sea.  Cockburn, who had been skeptical of how useful the Colonial Marines might be, found their skill as soldiers “astonishing” and soon was their staunchest advocate.  They “are really very fine fellows,” he wrote. “They have induced me to alter the bad opinion I had of the whole of their race and now I really believe these we are training, will neither shew want of zeal of courage when employed by us in attacking their old masters.”  Cockburn had decided he preferred the Colonials to his own Royal Marines, finding them stronger and less likely to desert.  The escapees provided invaluable intelligence, guiding the British through the backwoods and waters, often with more intimate knowledge than their former masters.  What Cockburn appreciated the most was the unalloyed fear they inspired in the Americans.

To reach the capital from Upper Marlboro, the British would have to cross the Eastern Branch of the Potomac - today known as the Anacostia River - at one of three points.  Ross chose to cross at the northernmost bridge, at the village of Bladensburg, located at a critical road juncture on the northeast side of Washington.  There the Eastern Branch narrowed considerably and split into two smaller, easily fordable branches.  One road from Upper Marlboro led directly to Bladensburg. But Ross chose a more southerly, circuitous route.  At 2 pm, bugles and drums sounded and officers ordered the troops to form up.  The men gave three cheers and began marching with the light infantry in the lead.

General WIlliam Winder, commander of the American forces, was still en route to Bladensburg to orchestrate his planned attack.  The news of the enemy advance shattered Winder’s grand plan to destroy the British at Upper Marlboro.  To the dismay of his men at Old Fields, WInder ordered a retreat.  Bladensburg would be the fight.