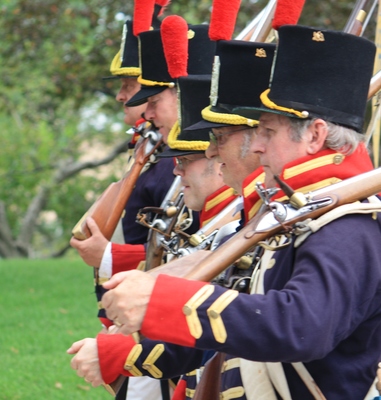 President Madison found General Winder conferring behind the lines with Secretary of War Armstrong and Secretary of State Monroe.  The president asked Armstrong if he had consulted with Winder about troop position.  Armstrong gave no suggestions, telling the president afterward that the troop disposition “appeared as good as circumstances admitted.”

Winder’s troops, many of them still huffing their way from Washington, totalled about 5,500 men.  Most were militia, including about 3,000 from Maryland and about 1,100 from the District of Columbia.  The remainder included 500 floatillamen, 120 marines, and several hundred U.S. Army regulars from several infantry and cavalry units.

WInder rode forward a few yards, exhorting the troops on the front line to be firm.  On the hill immediately behind the 5th Maryland, WInder was unaware that his entire front line had collapsed until he saw the men running his direction.  His view from the second defensive line - the one chosen by Secretary of State Monroe - was blocked by the orchard.  Winder took quick action, ordering the 5th Maryland forward in the hope of restoring his front line before more British troops crossed.  Joined by Pinkney’s battalion, the 600 men moved steadily down the hill in three ranks of blue.  Once within range of the enemy a volley was ordered.  The thunderous eruption of hundreds of muskets brought the British to a halt.

The 5th Maryland’s right flank was completely exposed by the two fleeing regiments. Worried they would be enveloped, WInder ordered the 5th Maryland and the Washington Artillery on the left flank to retreat up the hill, intending to resume the fight from a safer position.  The artillery officers ignored WInder and kept firing.  Winder sharply repeated his order, and the artillerists reluctantly limbered their guns and moved back. The enemy was swarming near the American’s right flank, and WInder again ordered retreat.

Said Private John Pendleton Kennedy, “We made a fine scamper of it.”