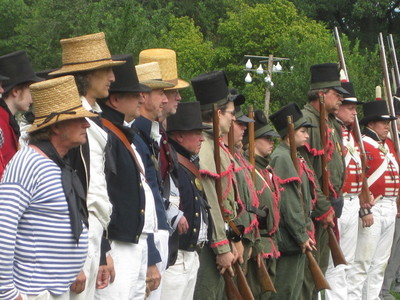 Six miles northeast of the capital, the men of the 5th Maryland Regiment stumbled into Bladensburg at sunset Tuesday, covered in dust and sweat.  Their glorious parade from Baltimore on Sunday seemed a distant memory.  After several stops and starts owing to General Winder’s indecisiveness, they had rushed to Bladensburg through scorching heat and clouds of dust.

They joined the brigade on Lowndes HIll, which commanded the roads leading into town on the likely British avenue of approach.  The 5th Maryland was a welcome addition, bringing the strength to around 2,100 men, but even so, the Maryland militia now in Bladensburg was by no means a formidable fighting force.  The two regiments were largely untrained, inexperience militia from Baltimore County.  The 5th Maryland, for all its elan, was dead tired and rather green itself.

Leaders, meeting at an emergency council of war, were incredulous that Winder expected their raw and tired militia, deprived of any support, to fight a veteran British force they estimated at three times their size.  The officers unanimously agreed that they should ignore WInder’s order and instead withdraw from Bladensburg and retreat closer to Washington.  It meant abandoning the good defensive position on Lowndes Hill, where volunteers from Washington and Bladensburg had dug extensive earthworks in recent days.  Orders were issued to strike tents.  The men, who had barely settled into their tents after an earlier false alarm, marched into the night again.  At 3:30 am, they crossed the bridge and moved out of Bladensburg.  The soldiers deemed too fatigued to fight were deprived again of rest.  Every time the column stopped for a moment, whole platoons lay down in the dusty road and dozed til the officers gave word to move on.

Around 9 am, a message arrived from WInder, once more ordering them back to Bladensburg.  Winders order was emphatic that the officers reluctantly concluded they had no choice but to obey.  They could not quite bring themselves to cross the bridge back into town and stopped short of the Eastern Branch.  The roads from Washington and Georgetown met at a 45 degree angle before crossing into Bladensburg, creating a triangular field.  Up front, toward the eastern point of the triangle about 350 yards from the bridge, two companies of volunteer artillery from Baltimore took position behind a small breastwork.  The 5th Maryland was placed in a large apple orchard about fifty yards off to the right of the bridge.

An alarm was raised and the men formed into a line of battle.  A cloud of dust had arisen across the river, announcing the rapid approach of a large body of troops.