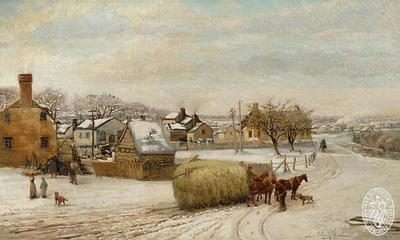 The town of Bladensburg lay almost entirely empty on the morning of August 24. Most of the 1,500 inhabitants had fled, and the pleasant brick homes scattered on the L-shaped main street were abandoned. Bladensburg sat six miles northeast of the Capitol, at the point where the turnpike from Washington to Baltimore crossed the Eastern Branch of the Potomac - now the Anacostia River. The Town’s days as a thriving port had come and gone before Washington even existed. After its founding in 1742, oceangoing sloops with goods from around the world docked at Bladensburg deepwater wharf to trade for tobacco grown in the rich surrounding soil. But from the start, Bladensburg was plagued by erosion. Silt from farming filled the channel, and the port became dormant.

The town survived as a center of commerce by virtue of good roads converging from Washington, Georgetown, Baltimore, southern Maryland, and Annapolis, a central location that also gave Bladensburg new life as a weekend destination. “People come from all directions to drink the waters on Sunday - all Georgetown in particular comes,” Rosalie Stier Calvert, who lived at the nearby Riversdale plantation, wrote her sister.

Today, historic buildings from 1814 still exist. Christopher Lowndes home, Bostwick, is located to the east. His son-in-law Benjamin Stoddert, the first secretary of the Navy, lived there for a time. The Market Master’s building, located at the corner of Annapolis Road and 48th Street, was the store where goods were traded and sold as they came on and off ships. The Magruder House, on Annapolis Road, once hosted George Washington on his many trips and may have been used as a field hospital during the battle. But in August 1814, Bladensburg greatest fame was still to come.