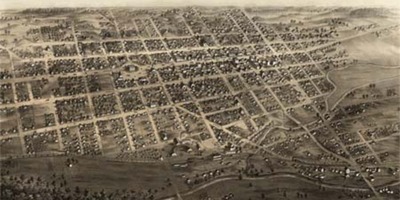 Marshall was started in 1830 and settled in 1831 by the Ketchum brothers from upstate New York. The Ketchum brothers had heard a lot about Detroit and Chicago and figured if they could build a city half way in between and make it popular, they could make a lot of money. They were right, they were land speculators.

Sidney Ketchum came in 1830 and rode by horseback from Ann Arbor until he found a place where rivers came together. He bought the land and went back to New York to get his brother George. While there, they talked it up saying that Marshall was the place to be. They named us Marshall after the Supreme Court Justice John Marshall, an extraordinarily brilliant man who established our judicial system as we know it. To give you an idea of how well respected he was, he was still alive when they named us Marshall.

The first log cabin was built in 1831. Just six years later, in 1837, Michigan was declared a state and Marshall was already one of the larger towns outside of the Detroit area. While it didn’t take much to be a large town in 1837, by the time the population here in Marshall reached 1,000, the overwhelming majority of the population were doctors, lawyers, politicians, educators or ministers so we had a bit of political clout as well.

When Michigan was declared a state in 1837, the capitol was put temporarily in Detroit. The legislature gave themselves ten years to decide where that final capital would be. Marshall didn’t need ten years. They were very confident that it was going to be right here. Indeed they even set aside the grounds across from the Governor’s Mansion to be Capitol hill, and we call it capitol hill to this day.

By 1847, there were several towns that wanted to be the capital and in their infinite wisdom the state legislature put the permanent capital in a place called Red Cedar Fishing Village that had 8 registered voters. It was soon renamed and became Lansing but you won’t find any there older than the 1840s for the simple reason that it didn’t exist.

Marshall would survive this Capital era bust and experience two more economic booms and busts in the 1800’s to help give it it’s unique architecture that we all love today.