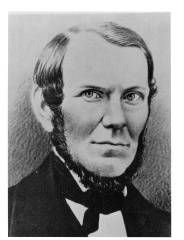 James Wright Gordon was born in 1809 in Plainsfield, Connecticut, he later lived in New York working as a college professor but was an attorney by trade.

He moved to Marshall, Michigan in 1835 and found great success in work and politics.

He was said to be a great orator, often swaying the jury with his closing arguments.

In the first two years of Michigan statehood, Gordon served as State Representative and then State Senator.

In 1839 he ran for Governor – building the Governor’s Mansion while campaigning – but at the Whig state Convention held in Marshall that year he came in second to William Woodbridge putting him on the ballot as Lieutenant Governor.

They won the election with Woodbridge becoming Michigan’s second Governor, the first elected one, but the next year Woodbridge accepted the appointment to US Senator so James Wright Gordon, Lieutenant Governor, became Michigan’s third Governor in 1841.

Though only Governor for just one year, Gordon was the first Michigan Governor to pardon a convicted slave.

After his stint as Governor, Gordon and his family remained in this house and he continued his work as an attorney at law – often representing slave cases across this entire region of Michigan.

One of the cases that Gordon advocated for was the Crosswhite Case. One of the largest slave cases in American history and it happed right here in Marshall, Michigan. There was extensive news coverage of this case at the time included letters and articles appearing in newspapers across the nation. Some of these letters were written by James Wright Gordon and well-known abolitionist Erastus Hussey.

This notoriety may have been what led to Gordon being asked to be the US Consul to Brazil. He accepted the position in 1850 and served for three years before his death in Pernambuco, Brazil in 1853.