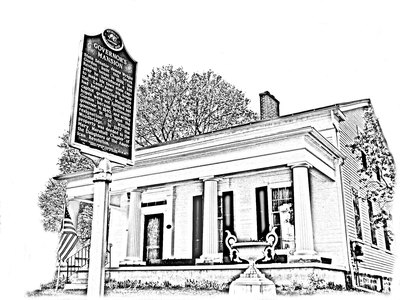 Welcome to the Governor’s Mansion, built in 1839 in Greek Revival Style.

James Wright Gordon had this house built while he was running for Governor. The grounds around us had already been set aside by the city for the much anticipated state capitol’s move here. And though a bit small and prosaic these days, this house no doubt looked quite stately and elegant perched atop ‘Capitol hill’

Gordon and his family moved in in the fall of 1839 and while he served as Governor the capitol was in Detroit, but this remained his family’s home until the 1880’s.

After the Gordons, it served as a private residence until the 1960’s at which point a woman was living here in just one room and the rest was in quite a state of disrepair. After her death, her descendants asked if there was a nonprofit in town that would like to take it over and the Mary Marshall Chapter DAR agreed and we’ve had it ever since.

We have nothing from James Wright Gordon and very little we could salvage from the home when we received it, but today the structure is filled with antiques donate over the years. It’s truly quite extraordinary and we received new donations every year.

These interior rooms have been taken back to the early industrial era of the later 1800’s to best match the collection of furniture we have.

We consider the house to be a bit of a hands-on museum. While we do have artifacts we ask you not to touch, including the clothing and materials, we often allow people to sit on the furniture. Indeed we are available for rental so people may have business meetings, receptions, and family dinners here at the Governor’s Mansion.

Unique collections of tools and toys are utilized for visiting school groups and special programs to give children the opportunity to touch and feel artifacts allowing history to truly come alive.

You are allowed to go throughout the house including the upstairs. Indeed, a visit to the museum is hardly complete without trip through the maids entrance to the second floor.