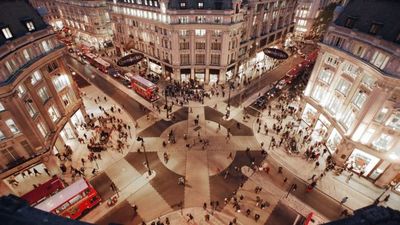 Oxford circus is at the centre of Oxford Street, which is a major road, running from Tottenham Court Road to Marble Arch,

It is Europe's busiest shopping street, with around half a million daily visitors, and as of 2012 had approximately 300 shops, many big department stores, of which the most famous is Selfridges,