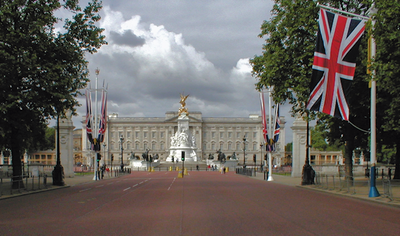 The Mall is a short but important road,

It runs from Buckingham Palace at its western end to Whitehall, right near Trafalgar Square at the eastern end,

On the way, it runs through Admiralty Arch,

The Mall was built as a ceremonial route in the early 20th century,

The route is often used for major national ceremonies,

When the Mall was built, a new façade (front face) was constructed for Buckingham Palace, and the Victoria Memorial was erected,

The surface of The Mall is coloured red to give the effect of a giant red carpet leading up to Buckingham Palace.