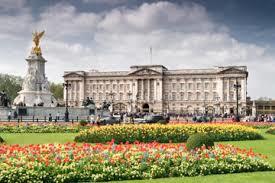 Buckingham Palace is the central London working Home of the Queen of the united kingdom.

Here she meets other heads of state and holds national banquets.

She only stays in this building for formal occasions, usually she lives in Windsor Castle.

If her own flag is on the flagmast she is in residence in the palace.

Today, Buckingham Palace is very much a working building and the centrepiece of the UK’s constitutional monarchy, serving as the venue for many royal events and ceremonies from entertaining foreign Head of States to celebrating achievement at Investitures and receptions.

More than 50,000 people visit the Palace each year as guests to State banquets, lunches, dinners, receptions and Garden Parties.