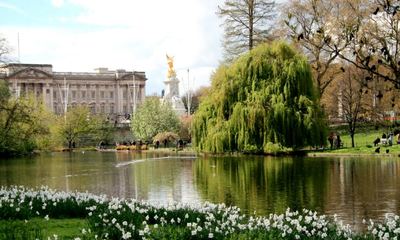 St James’s Park includes The Mall and Horse Guards Parade, and is surrounded by landmarks such as Buckingham Palace, Clarence House and Whitehall.

The park’s famous flower beds at the front of Buckingham Palace are a familiar backdrop to pageants including Trooping the Colour, as well as state visits and other ceremonial occasions.

Enjoy impressive views of the lake and fountain from St James’s Café, watch the resident pelicans at feeding time, or while away a sunny afternoon in a deckchair.

Pelicans have lived in St James’s Park for nearly 400 years. They were originally presented as a gift from the Russian Ambassador to King Charles II.