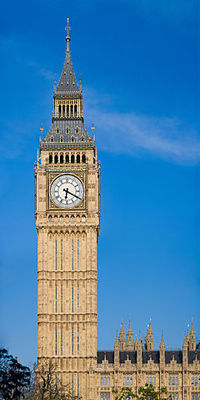 Big Ben is the nickname for the Great Bell of the clock at the north end of the Palace of Westminster  and is usually extended to refer to both the clock and the clock tower, The official name of the tower in which Big Ben is located was originally the Clock Tower, but it was renamed Elizabeth Tower in 2012 to mark the Diamond Jubilee of Elizabeth II,

The tower was completed in 1859, its clock was the largest and most accurate four-faced striking and chiming clock in the world,

The clock uses its original Victorian mechanism, but an electric motor can be used as a backup.

On 21 August 2017, a four-year schedule of renovation works began on the tower, which are to include the addition of a lift.