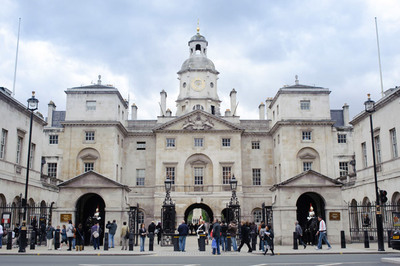 Horse Guards Parade is the ceremonial parade ground in St James's Park and is the scene of Trooping the Colour on the Queen's official birthday in June.

Horse Guards is the building with a clock tower over an archway, and remains the official entrance to St James's and Buckingham Palace.  Horse Guards dates from the eighteenth century and was designed by William Kent, the then Chief Architect to George II.

The building is guarded by two mounted cavalry troopers of The Queen's Life Guard who are posted outside from 10am to 4pm daily. The Life Guard change takes place here at 11:00am daily and 10:00am on Sundays.

During the Trooping the Colour, the central windows are opened so members of the Royal Family can watch the Queen reviewing her troops below.