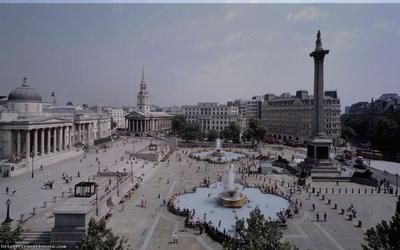 Trafalgar Square celebrates the famous Battle of Trafalgar where Admiral Nelson led the British Navy against the French and Spanish. Nelson's column dominates the square, it is 52 metres tall and is guarded by 4 lions. The square was designed by John Nash and was opened in 1844. The square is often used for public events, both celebrations and also political. It used to be full of pigeons until they were removed at the start of the 21st centuary because of the mess and damage they caused. The North end of the square is bounded by the National Gallery which contains a huge collection of many famous paintings, and is worth a visit at a later date. Canada House and South Africa House are also at the sides of the square. Now head across the square to Whitehall and walk down the Road on the right hand side until you come to Horse Guards Parade, seen by soldiers sitting on horses, hopefully.