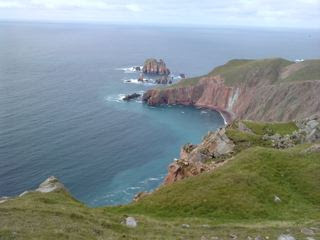 The view from the top of Ronas Hill is exceptional. You can see all of Shetland from Fair Isle to Muckle Flugga and on a very clear day you might even catch a glimpse of Fair Isle. The jagged rocks of the Ramna Stacks can be seen to the north-east, with Gloup Holm, North Yell in the background and the Muckle Flugga rocks north of Unst.  The Northmavine landscape is dominated by this lump of red granite, Shetland's highest hill,  (1486ft/450m), which is topped by a prehistoric chambered burial cairn. The summit has an Arctic climate, with stony soils and rare arctic and alpine plants. (15 varieties of Arctic flowering plants are to be found here.)

To the south-east are the scattered islands and bays of Yell Sound and Shetland's largest sea inlet, Sullom Voe. South are the islands of Out Skerries, Whalsay, Noss and Bressay, while in clear weather Fitful Head at the south end of Shetland is visible, 43 miles (70km) away.

The island of Foula, with its huge cliffs, rises out of the ocean to the south-west (like a massive iceberg when snow-covered sometimes in winter!), while across St. Magnus Bay are the island of Papa Stour and the Ve Skerries reef.

Allow plenty of time for a walk on Ronas Hill - you may want to linger and take in the atmosphere and vista at the top, as well as possibly going to see Shetland's largest but least accessible beach at Lang Ayre. Mists can appear on Ronas Hill quite quickly so it is advisable to be well equipped. The climate here can be deceptive, so care should be taken.

Ronas Hill can be reached by driving to the top of Collafirth Hill (230m), where there are the remains of a derelict NATO military communications base and communications masts. (It is a two mile hike from Collafirth to the summit of Ronas.)

The huge expanse of boulders resembles a moonscape and, with the echoes of former military activity, it exudes an other-wordly feel. The houses of Hillswick can be seen from the carpark at the top of Collafirth Hill on a clear day plus you can get a good view of Sullom Voe Oil Terminal and Yell Sound on the way back down. There are a few potholes to be navigated around near the bottom, but the rest of the steep road is in good condition. Heading north, take the turning up the steep road to the left before the Collafirth Brig. (bridge)

Ronas Voe is seven miles long, and dominated by Ronas Hill, named for the redness of its granite. Ronas Voe is often likened to a Norwegian fjord with its steep sides and is very picturesque. Arctic terns nest on the Blade, the beach at Heylor, in the summer and care should be taken not to disturb them when they are nesting. Between 1903 and 1920 there were two Norwegian whaling stations at the head of the voe.

At Dutchman's or Hollanders' Knowe is Hollanders Graves, 300 yds along the shoreline from the Ronas Fish Factory - a simple memorial to Dutch sailors killed in action in 1674, during the reign of Charles II. Their Dutch East Indian frigate 'Wapen van Rotterdam' was captured by the RN Frigate 'Newcastle'. The Dutch vessel had used Ronas Voe as a winter shelter during one of the Anglo-Dutch wars.

"After an express was sent to the British government, two frigates were despatched which found their prey in Ronas Voe, and after a severe contest effected a capture. " Manson's Guide to Shetland, T.M.Y.Manson, 1933.

The Dutch sailors are buried beneath this spot.

Prev Next
A visitor's quick guide to Northmavine, Shetland
HOME