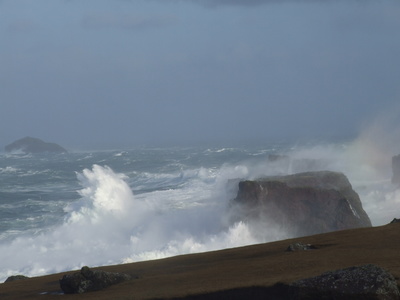 Eshaness is one of the prime destinations for any visitor to Shetland. It has some of the islands' most stunning coastal scenery, a fantastic community museum, wonderful little townships, and a cafe!

The lighthouse was built in 1929 by David A. Stevenson of the famous Stevenson family, who built most of Scotland’s lighthouses and gave the world the author Robert Louis Stevensonas well. It was automated in 1974 and the keeper's cottage is now self-catering accommodation.

Eshaness Lighthouse is perched on top of the cliffs, with dramatic views all around - don't forget your binoculars and camera! There is an interpretative board close to the lighthouse.

It is an exciting place to be in a mid-winter storm with huge waves crashing on the rocks below, and attracts numerous visitors on a calm 'simmer dim' evening (the 'simmer dim refers to the long light summer nights, when it is often light enough to read a newspaper at midnight) to see puffins and fulmars and watch a glorious sunset on the horizon.

Surrounding the lighthouse is a vast coastline with interesting walks. As with any coastal walk, great care should be taken. Within easy walking distance of the lighthouse is the blowhole The Cannon, and The Holes of Scraada (the Devil's Caves) 120 metres  end to end, which were formed when the roof caved in at the end of a long and narrow sea cave stretching more than 100 metres in from the coast. The sea flows to a beach at the base of the cliffs through an underground passage some 10 metres long. There were originally two holes, with a natural bridge, but this collapsed on 9th October 1873. A little further on is The Grind o' Da Navir (Gate of the Borer), a huge vertical sided gateway in the cliffs where the sea rips enormous chunks of rock out of the cliff face and hurls it inland. Calder's Geo is about 100 yards north-west of the lighthouse and is a deep dark rocky cleft cut into the rock stretching back from the sea. The entrance to what is thought to be the largest sea cave in the UK is visible if you look down, very carefully, into Calder's Geo from the southern edge.

Tangwick Haa Museum is in Eshaness, which is in the north-west corner of Northmavine, the most northerly parish of the mainland of Shetland. The Haa of Tangwick was built in the late 17th century for the Cheyne family who owned land in different parts of Shetland, including Tangwick. The last resident laird, John Cheyne, died in 1840. Part of the building was restored by Shetland Amenity Trust and opened as a museum in 1988 and the remainder of the building was restored and opened in 1999.

You must visit the Cross Kirk graveyard, steeped in superstition and featuring the graves of  legendary inventor Johnnie Notions and the great local fiddle player and pioneer Tom Anderson. Johnnie Notions Bod offers basic bothy accommodation and is where he used to live - where the smallpox vaccination he is famous for was pioneered.

There's the former fishing station at Stenness, where some of the most impressive seas can be seen on a windy day. And of course that cafe - at Braewick there is a full-service licensed cafe and restaurant, a camping and caravan site and warm and cosy wigwams to rent.

Prev Next
A visitor's quick guide to Northmavine, Shetland
HOME