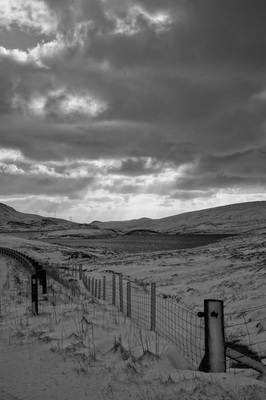 If you park at the lay-by next to Johnnie Mann's Loch, it's probably not that great an idea to fall asleep.

I used to stop for a wee nap sometimes, when I was driving back from Lerwick to Hillswick after work. It's 40 miles or so, and sometimes, when my eyelids began to droop, I would pull into a lay-by and have a dreamless sleep, waking...not refreshed, but, with a window wide, just about able to make it home. Sober, too, I hasten to add. I tire easily!

I once stopped, with an early twilight falling, next to the lovely little trout repository called Johnnie Mann's loch, which sits at the junction of the main A970 north and the roads to Sullom (to the east) and Nibon (to the west) As usual, I woke up after about 15 minutes, darkness having fallen, and drove home, groggily.

A few days later, I heard the story of  the original Johnnie Mann, who had tried to cross the ice on the little loch which now bears his name. The ice gave way. He was never seen again. What was seen there, by someone in the 19th Century who stopped by the loch for, ahem, a nap, was a friendly horseman who, when he took off his hat, was revealed as having no...head.

I have never stopped for a snooze there since.

There are more strange stories associated with the immediate vicinity (Nibon, just over the hill, is a very beautiful spot with a couple of holiday cottages for rent) which you will find hinted at by resident poet Jim Mainland, whose work I thoroughly recommend. His books are for sale locally. It was nearby in the 1950s that two local men cutting peats came across the mummified remains of the person now known as  'Gunnister Man' - the title of one of Jim's poems. The never-identified Gunnister Man had died in the 1600s, but the peat had preserved much of his clothing and the body too. He was carrying a purse with foreign coins, a walking stick, a wooden tub, two wooden tablets and a knife. Visit the Shetland Museum in Lerwick for more.

Anyway.  It shows what can happen when you stop for a snooze...and never wake up.

Take the car over the hill to Sullom, famous  for the first German bombing raid of World War Two to cause casualties - several local rabbits. Which gave rise to the famous Flanagan and Allen song 'Run Rabbit Run', or so they say.

Next
A visitor's quick guide to Northmavine, Shetland
HOME