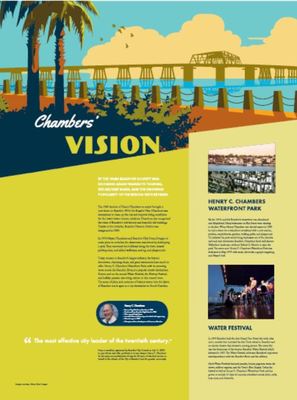 The 1969 election of Henry Chambers as mayor brought a new vision.

By the 1960s, the County was booming again - thanks to tourism, the military bases, and the growing popularity of the region with retirees. The 1969 election of Henry Chambers, as mayor, brought a new vision. With his Beaufort Plan, Chambers was determined to clean up the city,  and improve living conditions for the town’s lower-income residents. Chambers also recognized the value of our rich history and beautiful old buildings. Thanks to his initiative, the Historic District was designated in 1969.

In 1974 Mayor Chambers and the City Council began to make plans to revitalize the downtown waterfront, by developing a park. They renovated the bulkhead along the river, created parking areas, and added walkways, seating, and playgrounds.

Today tourism is our largest industry. Our historic downtown, charming shops, and great restaurants have much to offer. The Henry C. Chambers Waterfront Park, with its stunning views across the Beaufort River, is a popular tourist destination. Events such as the annual Water Festival, the Shrimp Festival, and holiday parades, also bring visitors to ourcoastal town. The sense of place, and centuries of history woven into the city's fabric, sets it apart as a top destination in South Carolina.