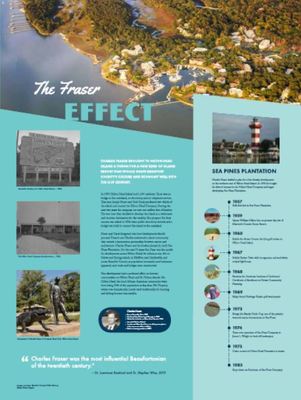 Rise of the Sunbelt -- Charles Fraser and the Fraser Effect

Charles Fraser brought to Hilton Head Island a vision for a new kind of island resort, one that would shape the County’s culture and economy well into the 21st century.

In 1950, Hilton Head Island had 1,000 residents. There was no bridge to the mainland, no electricity, and no telephone service. That year Joseph Fraser and Fred Hack purchased two-thirds of the island, and created the Hilton Head Company. During the next two years, the company cut over one million feet of lumber. The two men then decided to develop the island as a retirement and vacation destination for the wealthy. The prospect for their success was sealed in 1956, when public electricity arrived, and a bridge was built to connect the island to the mainland.

Fraser and Hack disagreed over how development should proceed. Fraser’s son Charles envisioned a resort community that created a harmonious partnership between nature and architecture. Charles Fraser and his brother, Joseph Jr, built Sea Pines Plantation. For the next 50 years Sea Pines was the model for development across Hilton Head. Its influence was felt on Dataw and Spring Islands, in Bluffton and Hardeeville, and across the County.  As population increased, new businesses appeared, and roads and bridges were constructed.

This development had a profound effect on historic communities on Hilton Head and St. Helena islands. On Hilton Head, the local African American community went from being 90% of the population to less than 9%. Property values rose dramatically. Lands, used traditionally for hunting and fishing, became inaccessible.