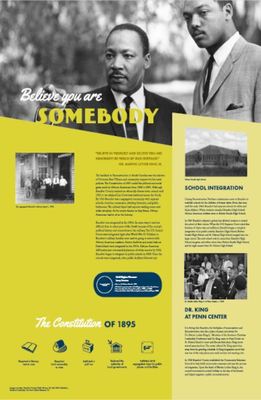 “Believe in yourself and believe you are somebody! Be proud of our heritage!” Dr Martin Luther King Jr.

The backlash to Reconstruction in South Carolina was the election of Governor Ben Tillman, and community support for his racist policies. The Constitution of 1895 undid the political and social gains made by African Americans from 1868 to 1890. Although the County retained an ethnically diverse town council until 1913, it too adopted Jim Crow laws, instituted across the South.

1920 found a segregated community, with separate schools, churches, restaurants, drinking fountains, and public bathrooms. The railroad depot had separate waiting rooms and ticket windows. At the movie theatre on Bay Street, African Americans had to sit in the balcony.

Integration came here in the 1960s. In some ways it was less difficult than in other parts of the South, because of the county’s political history and connections to the military. The U.S. Armed Forces were integrated right after World War 2.