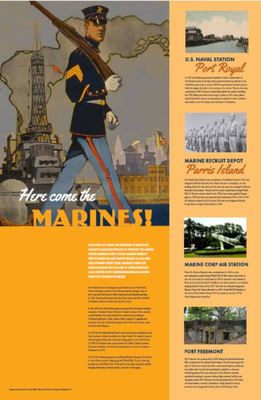 Port Royal Sound is the deepest natural harbor south of New York. France and Spain, and later Great Britain, saw the strategic value of the Sound, and starting in 1562 built forts on Parris Island.  300 years later, the Union Army and Navy defeated Confederate efforts to defend and hold the Sound.

In the 1880s, the United States grew concerned about European military expansion. President Grover Cleveland ordered a review of the country’s coastal defenses. The study found them outdated and in disrepair. Cleveland instituted a multi-million-dollar program to upgrade and construct forts that could defend against the world’s new modern navies, and their powerful guns.

In 1891 the Port Royal Naval Station and dry dock was established, as the first American military installation on Parris Island. For nearly 20 years, it was the largest military dry dock and coaling station on the East Coast. In 1899 Fort Fremont was constructed on Saint Helena Island, to protect the station. We were hard hit by the decision to move the coaling station to Charleston, in 1901.

In 1915 the Federal government established Marine Barracks, Port Royal, to train Marine recruits. Beginning with World War II, and continuing through the Cold War of the 1950s and 60s, the depot expanded rapidly - bringing thousands of steady middle-class jobs,to the region.