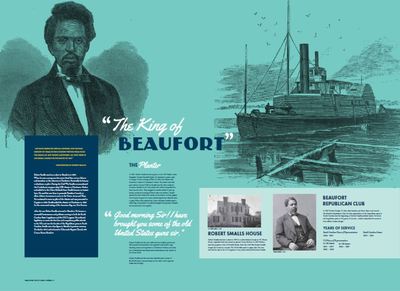 Robert Smalls -- The 'King' of Beaufort

“My race needs no special defense, for the past history of them in this country proves them to be the equal of any people anywhere. All they need is an equal chance in the battle of life.”  (on the gravestone of Robert Smalls).

After the war Robert Smalls returned to Beaufort. He became a successful businessman and politician serving in both the South Carolina State Legislature and the U S Congress. He authored legislation to create the first free and compulsory public schools in the country. and was the founder of the Republican party in South Carolina. Smalls was a key figure in our postwar recovery. He died in 1915 and is buried at Tabernacle Baptist Church, 901 Craven Street.

Robert Smalls was born a slave in 1839. When he was a young man his owner hired him out as a laborer and stevedore on the wharves in Charleston. Eventually he became a wheelman or pilot. During the Civil War Smalls commandeered the Confederate transport ship CSS Planter in Charleston Harbor and sailed it to the Union blockade lines.

Smalls became an instant hero. He used his new fame to persuade President Lincoln to allow African Americans to serve in the Union Army and Navy. He continued to serve as pilot of the Planter and was promoted to Captain in 1863. Smalls sailed the Planter to Charleston in 1865 for the ceremonial raising of the American flag over Fort Sumter.