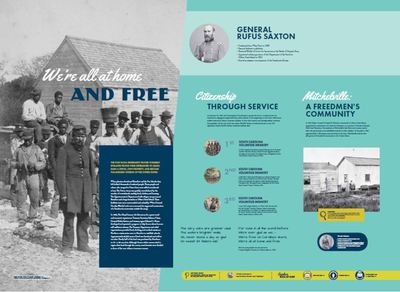 The Port Royal experiment proved formerly enslaved people were determined to learn, earn a living, own property, and become full-fledged citizens of the United States.

When planters abandoned the town and Sea Islands, they left behind thousands of enslaved people. These people and others who escaped to Union lines were called contrabands of war. The Union Army was quickly overwhelmed by the number of contrabands needing food, clothes, and housing. The Quartermaster’s Department built refugee camps around the marea, and a large barracks inside the camp on Hilton Head Island. These facilities were soon overcrowded and unhealthy. When General Ormsby Mitchel took over command, he supported construction of a Freedmen’s community outside the camp.

Northern missionaries came to establish schools. Approximately 60,000 acres of land were foreclosed and sold at tax sales. Freedmen purchased nearly half of the land in 10- or 20-acre lots. Although former white owners tried to regain their land through the courts, most lawsuits were decided in favor of the new African American owners.