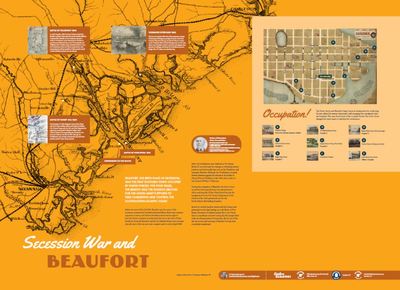 We were the birth place of secession, and the first town in the deep south to be occupied by Union forces. For four years, the region was the staging ground for the Union Army’s efforts to take Charleston and control the southeastern Atlantic coast.

Before the start of the Civil War, our town was the center of the secession movement led by Robert Barnwell Rhett. Rhett was a staunch supporter of slavery, and believed Southern states had the right to leave the Union to protect an institution that was at the heart of their livelihood. Ironically the town and the Sea Islands fell, just seven months after the start of the war, and were occupied until its end in April 1865.

After the Confederates were defeated at Port Royal, Robert E Lee refocused his strategy on defending interior positions and vital supply lines such as the Charleston and Savannah Railroad. Although the Confederates stopped Federal advances against the railroad at the battles of Honey Hill and Tullifinny in late 1864, they could not halt General William T Sherman.

During our occupation  the Union Army turned the town’s grand homes into administration offices and hospitals. Hilton Head Island became the headquarters for the U.S. Army’s Department of the South, and the chief operational port for the South Atlantic Blockading Squadron.

Our wealthy families abandoned their homes and plantations in the days leading up to the Battle of Port Royal. Thousands of enslaved people fled to the Union lines as contrabands, and were among the first people freed under the Emancipation Proclamation. By the end of the war, the society and economy of the County were completely transformed.