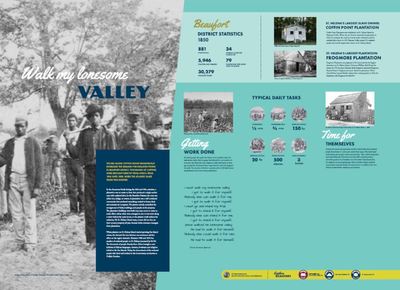 The Sea Island cotton boom dramatically increased the demand for enslaved people in the District. Thousands of captives were brought directly from Africa from 1806 until 1808, when the Atlantic slave trade was banned.

In the American South during the 18th and 19th centuries, a plantation was an estate or farm that produced a single market crop with enslaved labor. In the Beaufort District, the crop was either rice, indigo, or cotton. A plantation was a self-contained community that produced everything needed to house, feed, and maintain its occupants. The planter strictly controlled the arrangement of fields, buildings, and people on his property.

The plantation buildings were built near easy access to water or roads. Slave cabins often were arranged in one or two rows along a street behind the main house, so the planter could enforce his authority. On Saint Helena Island many owners did not live on their country property all year. Instead white overseers managed their plantations.

When planters on Saint Helena Island started growing Sea Island cotton, the demand for new laborers was enormous and the effect on the region dramatic. Between 1800 and 1810 the number of enslaved people on Saint Helena increased by more than 86%. The thousands of people directly from Africa brought a new infusion of African languages, customs, foodways, and religious beliefs to the Sea Islands.

Today the descendants of the enslaved people who lived and worked in the Lowcountry are known as Gullah Geechee.