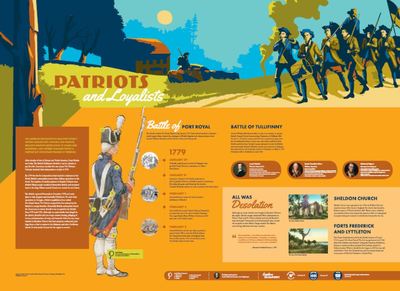 The American Revolution in our District divided families into Loyalists and Patriots, brought wanton destruction to homes and businesses, and offered enslaved people a fleeting but unfulfilled promise of freedom.

After decades of war in Europe and North America, Great Britain was broke. The British Parliament decided to tax its colonies to pay the bills. Americans decided this was unjust. The Thirteen Colonies declared their independence on July 4, 1776.

By 1778 the war for independence had reached a stalemate in the North. British commanders moved their military operations to the South. The loyalties of wealthy planters in the District were divided. Many people considered themselves British and remained loyal to the king. Others wanted America to control its own future.

The British captured Savannah in December 1778, and made plans to take Augusta and eventually Charleston. To cover their operations in Georgia, a British amphibious force raided Port Royal Island. The Patriots stopped this first attempt by the British to occupy our town.

Eventually British naval power forced the Americans to retreat. The town t was occupied by the British from 1779 until 1781. Although no major battles were fought in the district, we did not escape wanton looting, pillaging of homes, and destruction of crops and livestock. After the war, many loyalists in the District had their property confiscated, paid large fines, or fled to estates in the Bahamas and other Caribbean islands. It took nearly 10 years for the region to recover.