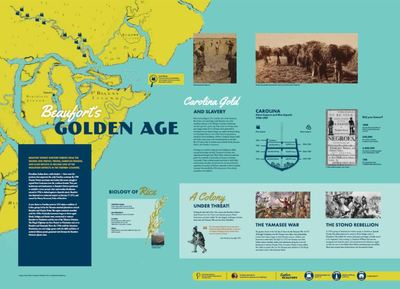 We survived threats from the Spanish and French, pirates, American Indians, and slave revolts to become one of the wealthiest districts in the Thirteen Colonies.

Deer skins, Indian slaves, cattle, lumber―these were the products that supported the early Carolina economy. By 1709 Charles Town’s merchants and traders felt secure enough to expand their businesses into the southern frontier. That year landowners and businessmen in Beaufort District petitioned to establish a town around a fort and wooden blockhouse erected in 1706 to defend against a Spanish attack. Beaufort was chartered as a town and seaport on January 17, 1711, and named for Henry Somerset, the Second Duke of Beaufort.

A new threat to Carolina arose in 1715 when a coalition of Indian groups led by the Yamasee attacked plantations around our District and Charles Town. The region remained unsettled until the 1720s. Gradually businesses began to thrive again. Roads, bridges, and ferries were constructed to connect Beaufort to Charleston and the rest of the Thirteen Colonies.

The King’s Highway ran from Boston to Charleston and on to here then Savannah. From the 1740s until the American Revolution, rice and indigo grown with the skills and labor of enslaved African people generated vast fortunes for the District’s planter class.