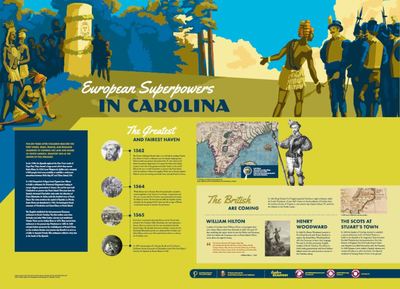 For 200 years after Columbus reached the West Indies, Spain, France, and England competed to control the land and riches of North America. The center of this struggle was right here.

In the 1500s the Spanish explored the East Coast south of Cape Fear. They charted a large sound which they named Santa Elena. In 1526 Lucas Vázquez de Ayllón and a company of 600 people tried unsuccessfully to establish a settlement somewhere between Bulls Bay, South Carolina and Tybee Island, Georgia.

In 1562 Gaspard de Coligny hired Captain Jean Ribault to build a settlement for Protestant Huguenots hoping to escape religious persecution in France. He and his men built Charlesfort on present-day Parris Island. Two years later the Spanish destroyed Charlesfort and, under the direction of Pedro Menéndez de Avilés, built the fortified town of Santa Elena. The town served as the capital of Spanish La Florida. Santa Elena was abandoned in 1584. Archaeologists found remnants of Charlesfort and Santa Elena on Parris Island.

The English established the first permanent European settlement in South Carolina. The first settlers came from Barbados and other West Indian colonies and established Charles Town on the Ashley River in 1670. They moved their settlement to the present-day Charleston in 1680. In 1684 colonial leaders sponsored the establishment of Stuart’s Town on the southern frontier near present-day Beaufort to serve as a buffer to Spanish Florida. This settlement suffered a fiery fate at the hands of the Spanish.