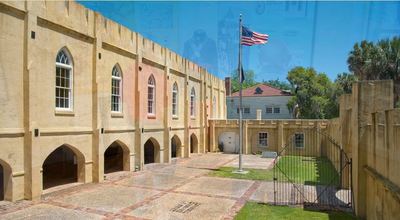 Welcome to the Beufort History Museum in the historic Arsenal

The Arsenal was built in 1798 to house the Beufort Volunteer Artillery, after it fought with the Continental Army during the Revolutionary War. The National Guard here traces its roots to the local militia, and is recognized as the fifth-oldest unit in the United States.

The 200+ year-old, yellowish building has come a long way since 1798. lt was built on the original city square to serve as headquarters and store weapons for the volunteer artillery, a militia of prominent citizens who protected the city and ports in times of war and hosted elite social events.

Today it houses the Museum and Tourist Visitor Center.