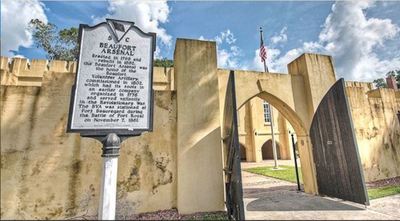 ...Welcome to an audio tour of the Beaufort History Museum...

Before St. Augustine, Jamestown and Plymouth, Beaufort District's Parris Island was the site of Santa Elena founded by the Spanish -- the first European Colonial capital in what is now the United States.  The Revolutionary War battle of Grays Hill was fought just outside of Beaufort, and a Beaufort District plantation owner Thomas Heyward, Jr. signed the Declaration of Independence.

The seeds of the Civil War were planted here, when prominent residents secretly met to plan secession from the Union in a Craven Street home, now famously known as “Secession House.” In November 1861 during the early days of the Civil War, white residents hastily abandoned their homes and fled town as the Union forces sailed into Port Royal Sound. For the rest of the war Union troops made us their headquarters, transforming many of the antebellum mansions into hospitals for the wounded.

With the Civil War still raging, Reconstruction began here when 10,000 slaves were liberated during the early months of the war. Northern missionaries educated the newly freed men, women and children at schools like Penn School as part of the Port Royal Experiment.

You’ll hear these stories and learn much more about how we changed the course of America’s history, when you step back in time at the Beaufort History Museum!