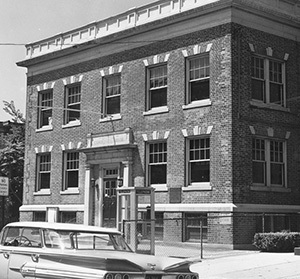 Welcome to The Dixwell Community House, known as the Q House. Originally located at 98 Dixwell Avenue, this historic site contains a wealth of New Haven history. For this tour, we would like to focus on one woman, Laura Belle Reed McCoy, who played an important role in the Q House, and so much more.

Born in Carlisle, NY in 1890, Laura Belle Reed McCoy was a Mohawk Indian and African American. When the Q House first opened in 1924, McCoy was its first associate director, a position she stayed in for 13 years. She also founded the first Black Girls’ Scout group in the country in 1932, holding their meetings within the Dixwell Q House.

In addition to her work with the Q House, Ms. McCoy was also politically active. From 1940 to 1943, McCoy served on the Board of Alders for New Haven. In fact, she was the first non-white woman in the country to be elected to city council.

Along with her work within local government, McCoy was also a nurse. She combined her medical and political work by being on the Elderly Planning Committee of the White House Conference in 1971. Also, in 1976 she was appointed to the Advisory Council of Connecticut's Department on Aging. She has impacted New Haven, Connecticut, and the country in so many ways, yet her name is barely known.