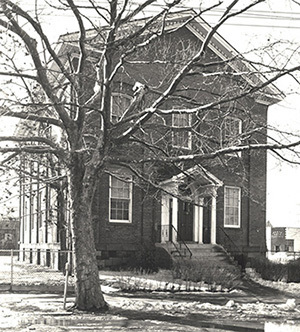 Excluded from the all-white musicians union, New Haven’s African American musicians organized their own all-Black union to protect their rights as workers in the music industry. Established in August of 1924, Local 48 of the American Federation of Musicians was formed. At a meeting held here at the Masonic Hall, 50 Black musicians gathered. They elected James Fletcher as union president and Joshua R. Holland was named secretary.

The beautiful building that housed the masonic temple, here at the same site where the Goffe Street School and YMCA was located, was built in 1913. It later housed the Greater New Haven Trades Council. The building was sadly demolished in the mid-1960s as part of the city’s urban renewal program, which you can learn more about in our tour of the Hill.

While we are on the topic of Black musicians, it is worth mentioning a famous doowop group from the Dixwell area of New Haven: the Five Satins. In 1956, they recorded the hit, “In the Still of the Night,” in the basement of St. Bernadette Church located at 385 Townsend Ave. This song topped billboard charts and remains an oldies favorite.