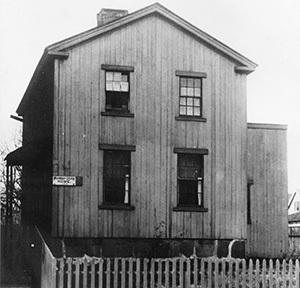 Hannah Gray was an African American seamstress born in New Jersey in 1805. In 1850 she moved to Connecticut and was living here on Dixwell Avenue. There is some conflicting information regarding her original home at either 158 Dixwell Ave or 172 Dixwell Ave. She earned money as a domestic worker, and donated money to her church and to the abolitionist movement. Gray died in 1861, sadly never seeing the end of slavery in the United States.

She wrote in her will that she wanted her home to be used for low-income elderly women of color, and honoring her wishes, the Hannah Gray Home was born. The home operated at its original location for many years, but began to struggle financially and eventually burned down in a fire. A group of African American women from various churches on Dixwell came together to help reopen the home. In 1911, the home was moved to 235 Dixwell Ave, which is its current location. The home operated until 1996 when it was forced to close for financial reasons. After this happened, Anthony Davis launched a campaign to save the home and was able to get a loan from the Greater New Haven Community Loan Fund to prevent the home from being sold. On January 7, 2010 the home reopened.