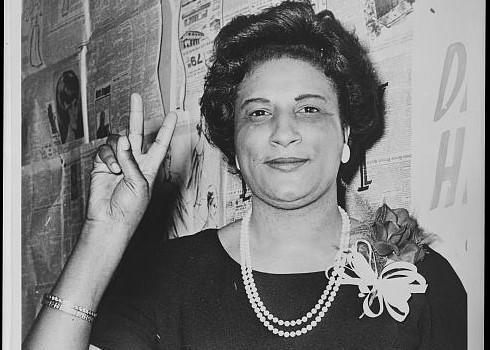 You are now beginning your virtual tour of New Haven’s Dixwell neighborhood. Our first stop is Hillhouse High School, where you will learn about Constance Baker Motley, just one of many iconic Hillhouse grads.

Constance Baker Motley was born on September 14th, 1921 in New Haven, CT. Her childhood home, though not on the route of this walking tour, is not too far from here, located at 8 Garden Street. Constance Baker Motley was the ninth child of twelve children. Her family was from an island called Nevis in the Caribbean. In the 1920s, there was a large West Indian community in New Haven, and because of this Motley had a community she felt a part of. After attending public school in New Haven, Motley graduated from Hillhouse High School in 1939.

Motley is not someone who everyone recognizes or praises for their Civil Rights activism. Although Martin Luther King and Rosa Parks were far more well known for their actions in the Civil Rights Movement, Constance Baker Motley was one of the key players during this movement. In 1954, Motley served as an attorney and worked closely with Thurgood Marshall in the Brown v. Board of Education case, which ruled school segregation unconstitutional. In 1963, when MLK was sent to jail for a nonviolent protest, Motley represented him and many others. She got Dr. King out of jail, and the youth who were arrested out of jail and back in school. In 1964, Motley became the first Black woman ever elected to the New York State Senate. She was also the first African-American woman appointed to be a federal judge.

If you would like to learn more about Constance Baker Motley, read her biography published by Gary Ford Jr., a Connecticut native, old friend of Motley, and assistant professor of Africana Studies at Lehman College. Mr. Ford not only met teachers and students at Hillhouse to discuss getting more recognition for Motley and her role in the Civil Rights Movement, he is also working with senators and other leaders to get Constance Baker Motley the local and national recognition she deserves.