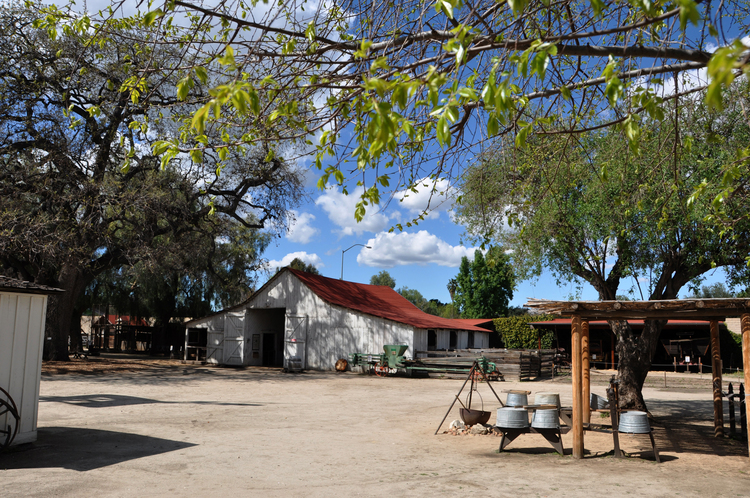 Originally located on the other side of the Ventura Freeway, the barn was built by Juan Menendez and Pedro Orsua in 1912 as a standard center aisle design that could accommodate horses and wagons. It was moved closer to the house, to the right of the existing cactus by the back gate, when construction of the freeway began in the 1950s. Due to another freeway expansion in the late 1960s, the barn was moved for a third time to its present location.

Inside, there are three stalls and a tack room on the east side, and hay bales and buggies on the west side. A replica of Juan Menendez’s blacksmith shop is housed in the southwest corner of the barn, which was originally a tack room. (A blacksmith shop would never be attached to a barn due to the hazards of fire.) The main components of a blacksmith shop are a forge, bellows, anvil, hammers, tongs, and other tools. A forge is a hearth or workplace where coal is burned for heating metal. A bellows furnished strong blasts of air, allowing the forge to reach the desired temperature, usually between 1400 and 2000 degrees Farenheit. Heated metal was held with tongs and hammered into shape against an anvil. Blacksmiths crafted horseshoes, branding irons, and a variety of tools and were also responsible for metal repairs.

The Fairbanks platform scale by the blacksmith shop entrance was invented for weighing heavy objects such as hay, grain, wool and other agricultural materials. Prior to this, bulky objects were hung on a balance beam for weighing, which often produced inaccurate results. The variety of antique saddles hanging on the north wall are well worn; the metal bits demonstrate how horses and mules were controlled when ridden or driven.

According to Juan Menendez’s notes, the original barn and a separate blacksmith shop were located across Calabasas Road. Pedro Orsua recalls salvaging boards when both structures, along with a corral, burned down in 1907. Pedro used the salvaged wood to build a roadside stand where he sold cold drinks.