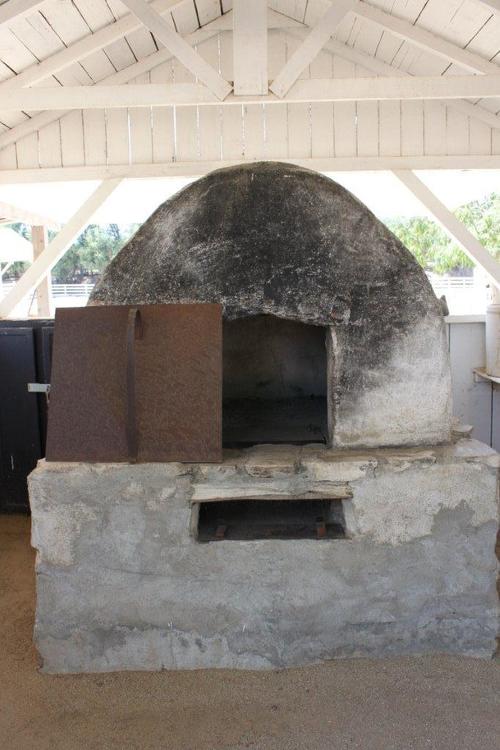 Outdoor hornos were used for large roasts and baking bread. Housed at the Autry Museum and referred to as the Menendez Adobe, artist Eva Scott Fenyes painted several watercolors of the Leonis Adobe and surrounding structures in 1915. Fenyes’ watercolor of Miguel’s horno shows that it was originally located near the dovecote and chicken pens. The current horno is smaller than the original and is located closer to the kitchen. Made of local limestone and adobe bricks, the original horno was twice as large as our current oven and was not sheltered. The present-day horno sits under a wood covering specifically built for protection against rain.

The horno does not have a chimney; all the heat was meant to be kept in. Wood was burned inside the large cavity until it was hot enough for cooking. The fire was built inside the deep opening and the embers were either pushed to the back or around the sides. Meat or dough were placed inside the horno with two large, long-handled wooden spatulas. Once the oven door was closed, meat could be cooked, or bread baked within an hour. Miguel Leonis employed two Frenchmen solely for baking golden loaves for both the family and the dozens of ranch hands he employed.

The stone barbecue near the horno was built by the Agoure family in the 1920s.