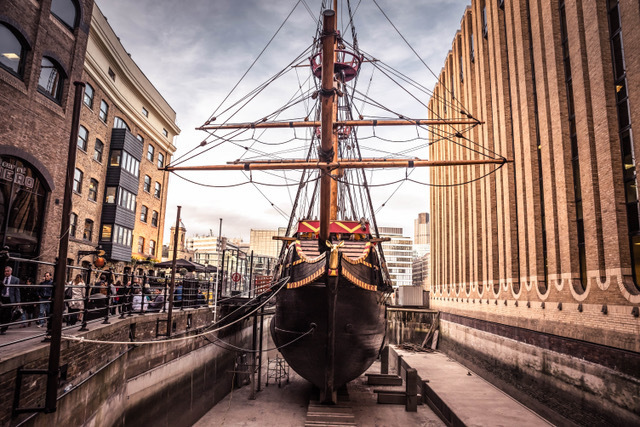 Welcome to the Main Deck

Welcome aboard this full-scale reconstruction of ‘The Golden Hinde’ . Between 1577 and 1580, The Golden Hinde became the first English ship to circumnavigate the world, under the captaincy of Francis Drake. During this voyage, Drake and his crew plundered Spanish colonies in the Americas and brought back vast wealth, a sizable portion of which went to Queen Elizabeth I.
The ship you are stood on was built in Appledore, Devon in 1971. It was launched in 1973 and since then has completed over 100,000 nautical miles.
The raised area in the middle of the deck is the main hatch. It can be opened to allow goods to be more easily lowered down into the hold or brought up to the main deck. The hatch also allows sunlight to reach the lower decks. During adverse weather the hatch can be covered with a canvas and ‘battened down’ , to provide shelter for the decks below.
Just beyond the hatch you will see two carved figures, the ‘Knights heads’ . This decorative structure is primarily used for billeting ropes however there is a superstition that if you touch the carved figures you will gain protection and good luck. Why not give it a try?