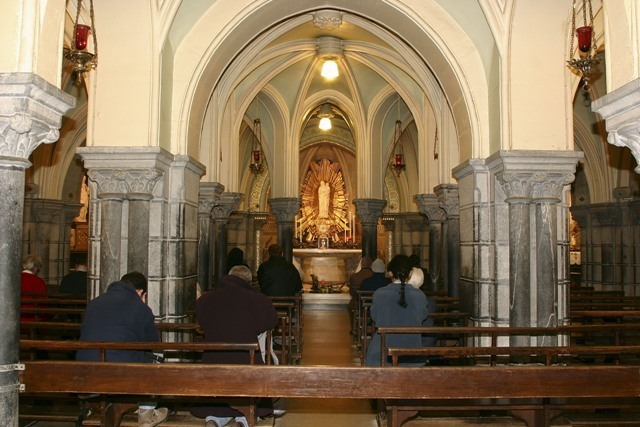 The Crypt of the Basilica

The Upper Basilica, The Lower Basilica and The Crypt are all together referred to as simply, 'The Basilica' - which can be confusing for those visiting Lourdes the first time.  The Crypt is situated between the Upper and Lower Basilicas, and is the original chapel that was built as soon as possible after Our Lady had asked for it. It was opened on the 19th of May 1866 and has room for 120 people.

Fr. Dominic Peyramale, together with his bishop, bought the grotto and the land around it from the Commune in 1861, three years after the Apparitions had ended. Immediately they set about modifying the area to make it more accessible to visitors and so, on the 13th of September, 1863, construction work on the chapel began.  After its completion it was consecrated, on Pentecost Sunday in  May 1866, by Bishop Bertrand Laurence of Tarbes. Bernadette, whose father had helped to build the chapel, was there for the consecration.

Above the entrance to the Crypt is a statue of Saint Peter, and a mosaic of Pope Pius X, who instituted the Feast of Our Lady of Lourdes.  A long access corridor covered with messages thanking and praising God, for all He has done, through the intercession of the Blessed Virgin Mary, leads you to this place of silence and personal prayer.  The nave is small, and people are immediately struck by the sight of the enormous pillars, which support the weight of the Upper Basilica, that was constructed on top of it.