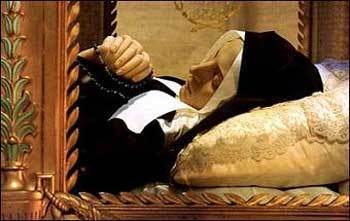 18th and Final Apparition - The Declaration

The Apparitions were almost ended, Our Lady's requests for a chapel and processions had been heard, and Lourdes was on the way to becoming a shrine.   Meanwhile the town authorities had decided  to barricade the Grotto, still at that time the property of the Paris Commune, the anti-religious, revolutionary government that ruled France in those days.

For the last time, Bernadette saw the lady - although she still did not really know who the lady was.  Bernadette had not fully understood the name, 'The Immaculate Conception'.  To her she was still 'the little lady'. She could now only see her from the opposite side of the River Gave.  However, she said later that on this occasion the little lady was:  'more beautiful than ever'.

The Bishop of Tarbes, in whose diocese Lourdes was, had earlier dismissed Father Peyramale. However, he must have taken seriously what Father Peyramale had said.  In that same month, on the 28th of July, he established a commission which would decide, once and for all, the significance of the apparitions which had taken place at the grotto of Massabielle.  On the 18th of January, 1862 he solemnly declared that, in the name of the church, he recognised the apparitions as authentic.

In due course the chapel that Our Lady had asked for was built, processions began to be organised, and a statue of Our Lady was placed in the Grotto. Underneath were the words: 'Que Soy Era L'Immaculada Conceptiou'.  Our Lady had known that Bernadette could not speak French, but only the unusual Occitan dialect belonging to that southwestern corner of France. Therefore, when she gave her name to Bernadette, in her motherly concern, Our Lady had spoken in the only language that Bernadette could understand, which was that local dialect.

And what happened to Bernadette?  She went to the hospice - nowadays, we would probably call it a special school - run by the Sisters of Nevers, being prepared for life as a nun.  Eight years later she joined the sisters in the convent at Nevers, where she died of tuberculosis, aged 36.