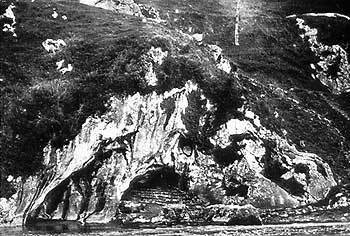 Bernadette went again to the Grotto.  This time the lady spoke.    She  said: 'Will you be good enough to come here everyday for fifteen days?'  She spoke very politely, which no one had ever done before.  Bernadette was thrilled - she was only a servant-girl, and was used to people always speaking roughly to her. This was wonderful!

The lady also said to her: 'I do not promise to make you happy in this world, but in the next'.

This time Bernadette's mother, her Aunt Bernarde and some neighbours all accompanied Bernadette to the Grotto.  They each brought a lighted candle. All of them were full of superstition, and were anxious to know who the apparition was, but were worried, so they decided that a candle would protect them.

News of the apparition was spreading by now to other towns.  Bernadette said that the lady had taught her a prayer; strangely, she didn't then, or at any time in her life, say what the prayer was.

By now the authorities were getting worried, and even the local police were involved, and interrogating Bernadette.  People were holding a lighted candle underneath her hands as she was praying, to see how she would react, but it was evident that Bernadette felt nothing.

Still more people had come, all curious to know what was happening. On this occasion the apparition lasted an hour, but Bernadette did not tell anyone what the lady had said.