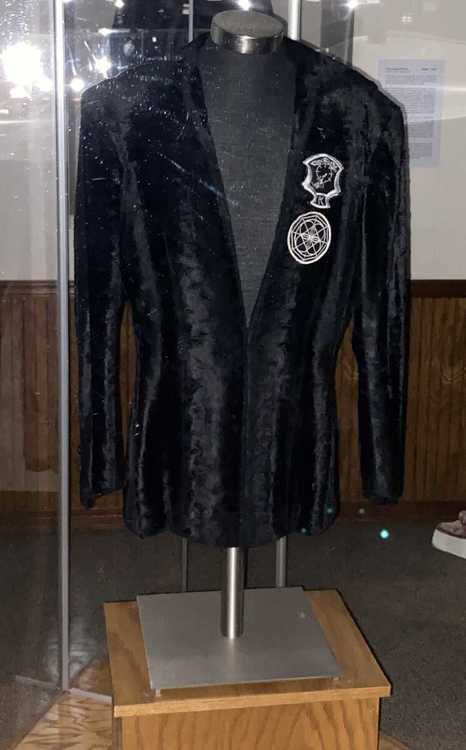 Elvis Presley was born to a poor family in Tupelo, Mississippi, and moved to Memphis, Tennessee in 1948. He was influenced by all kinds of music, including gospel, spirituals, and rhythm and blues. In 1954, Sun Studios in Memphis recorded his version of “That’s All Right,” which began his music career. Elvis brought Rock and Roll to a broader audience. He sang with great emotion and moved energetically on stage. In the late 1950s, when serving with the army, Elvis was introduced to karate. He also met Priscilla Beaulieu, who he married in 1967. After years of recording music that was less popular, Elvis recorded an energetic TV concert in 1968 which brought him back to popularity. Elvis and his wife Priscilla separated in 1972 and divorced in 1973. Though his health declined, Elvis continued to tour and recorded music until his death in 1977.

Priscilla gave this black faux-fur jacket to Elvis. The front has two white karate patches on the left side. After beginning karate training in the army, Elvis continued throughout his life and earned a 7th-degree black belt.

The top patch, shaped like a shield with curved-in sides, is a simple version of the Kenpo Karate patch. Ed Parker, who created the American Kenpo style, was one of Elvis’s teachers, and he designed the patch. A “K” for Kenpo fills the square sticking off the bottom of the shield. In the middle is a circle with marks like a clock around it, representing the universal pattern of movement for the martial artist. Over the top of the circle curves a long dragon with open jaws, representing cunning and force. At the bottom, a snarling tiger, representing strength, stretches his claws up toward the dragon.

The lower patch is the Kenpo Yantra symbol, which is a circle with many lines and curves that cross each other in the middle. It was also developed by Ed Parker to help describe the many movements of karate and how they flow from one to the other.

The jacket is on loan from Graceland.