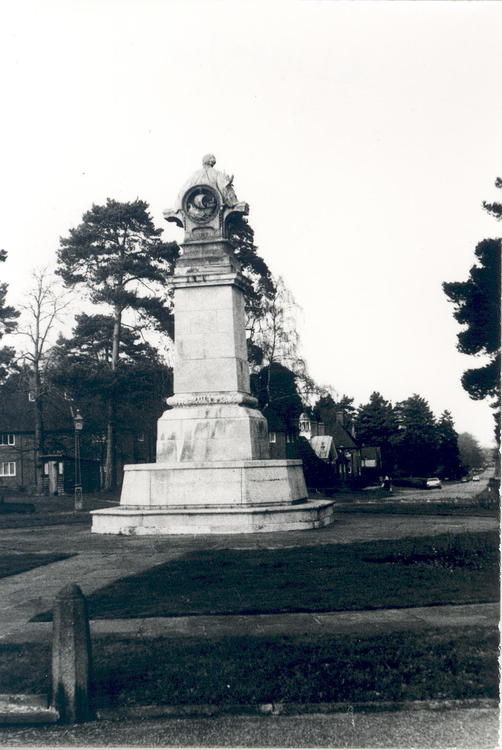 Now our trail moves into the more Westerly parts of the borough of Elmbridge. As you set foot in Whiteley Village from the North Road entrance, continue moving along this road and further into the village, with Burwood Road behind you. Eventually, you will come to the central octagon. Standing tall in the middle of the green within Circle Road is a memorial to William Whiteley, the founder of Whiteley Village. Whiteley was heavily influenced by, and benefitted greatly from, the British Empire.

The life story of William Whiteley is told in the inscription on the south side of the Central monument. Born at Agbrigg in Yorkshire in 1831, he was apprenticed at the age of 16 to a drapery firm in Wakefield. He went to London to see the Great Exhibition of 1851, and was inspired by the array of exhibits there from across the British Empire. He started a small business of his own, William Whiteley Limited, which eventually became Whiteleys, one of the first department stores in London. This included a fashionable ‘Oriental Department’, which made use of Britain’s imperial influence over trade with China by stocking cheap imports from the country. In 1839 and 1856, the British Empire had fought two Opium Wars with China, which had been sparked partly by Britain's abuse of this free trade with the latter for its own gain, among many other issues.

William Whiteley died in London on the 24th January 1907, leaving £1 million of his huge fortune in his will to build Whiteley retirement village in Elmbridge. His statue at the site depicts a trading vessel on the south-facing side, commemorating his 'Enterprise' underneath this.