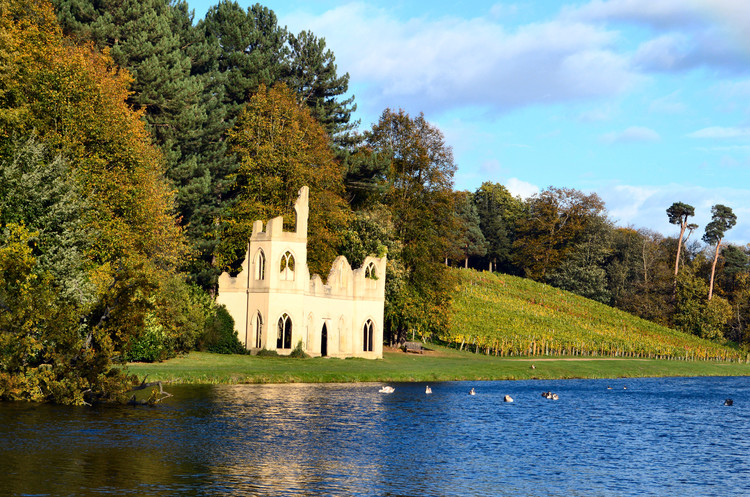 The next stop on our trail - Painshill Park in Cobham - is on the surface a classic British landscape. But look closer, and you will see that the garden's mixture of architecture, shrubs, trees, and other features, reveal a variety of influences from Europe and the former colonies. The garden actually has many links to the British Empire which are hidden in plain sight.

The extensive 158 acre grounds once belonged to British politician Charles Hamilton, who cultivated them into the beautiful landscape we can see today. Hamilton was born in 1704 and was inspired as a young man by his Grand Tour of Europe. On his return to England in the 1730s, he began creating the grand Painshill Park. The features of the garden were mostly inspired by the things Hamilton had seen while abroad on the Continent.

Perhaps the strongest link to the Empire itself lies in the John Bartram Heritage Collection of North American trees and shrubs which grow within the park. In the 1730s, the trees were sent directly to Painshill from Philadelphia, an American city in the British colony of Pennsylvania. The trees were sent from the 107 acre botanical gardens of the famous naturalist, John Bartram. Philadelphia heavily benefitted from the transatlantic slave trade and from the production of sugar cane in the West Indies. Indeed, Bartram himself was at one time a slave owner, although is widely considered to have developed an anti-slavery stance in later life, and eventually liberated many of the enslaved people in his household. Bartram regularly supplied seeds from the New World to its colonisers in Britain and Europe, who were fascinated by the 'exotic' new species made available to them.

Bartram's collection at Painshill and the beauty and variety of the garden became so renowned that George Washington and Thomas Jefferson paid it a visit when it first opened to respectable visitors. Just a few years later, after the American War of Independence raged against Great Britain, the two prominent visitors to Painshill would become Founding Fathers, and the first and third presidents, respectively, of the newfound United States of America.