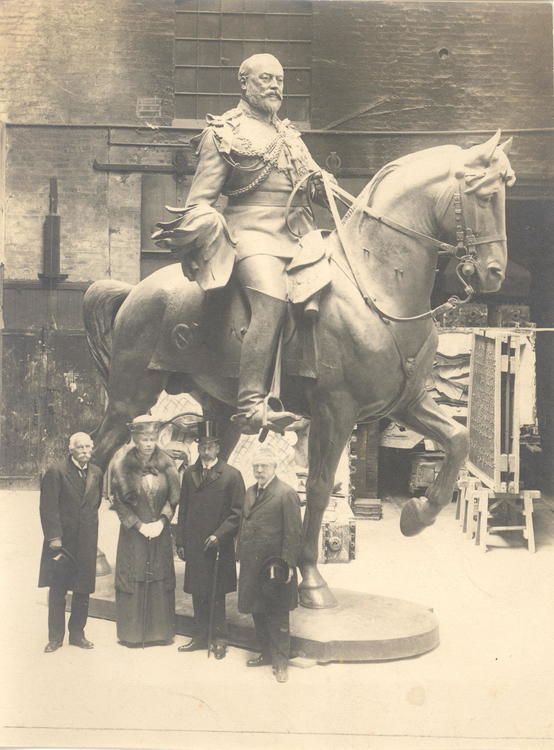 Stop number two is a short walk around the corner from our first location on this trail. Make your way up the high street towards the River Thames, and turn down Summer Road, walking with the bank of the River to your right. As you continue up this road, you will eventually see another blue plaque on a building to your left, entitled 'The Foundry'.

This denotes the original site of Thames Ditton Bronze Foundry, which was founded by Cox and Sons in 1874. From 1897, the Company came under the control of Arthur Bryan Burton, taking on his name and remaining so until its final closure in 1933. As the plaque states, the Bronze Foundry here was responsible for casting some of "the most famous bronze statues of the British Empire", including numerous Queen Victoria statues which were erected across the country to celebrate her status as 'Empress of India'.

Perhaps one of the most prominent castings at the foundry was a statue of Edward VII. In the Elmbridge Museum collection is a photograph of King George V and Queen Mary, standing in front of the imposing statue during a royal visit to the Foundry in 1921.

The statue of the late Edward VII was sent from Thames Ditton to New Delhi, the capital of the British Raj at that time. The royal imagery acted as a visible symbol of British imperial prowess, and a reminder of British ascendency in India. It was taken down in 1947, after the Partition of India, and placed in Delhi's Coronation Park, alongside other unpopular imperial statues. Eventually, in 1969, the statue found a new home in Canada, in the centre of Toronto's Queen's Park, where it still stands today.