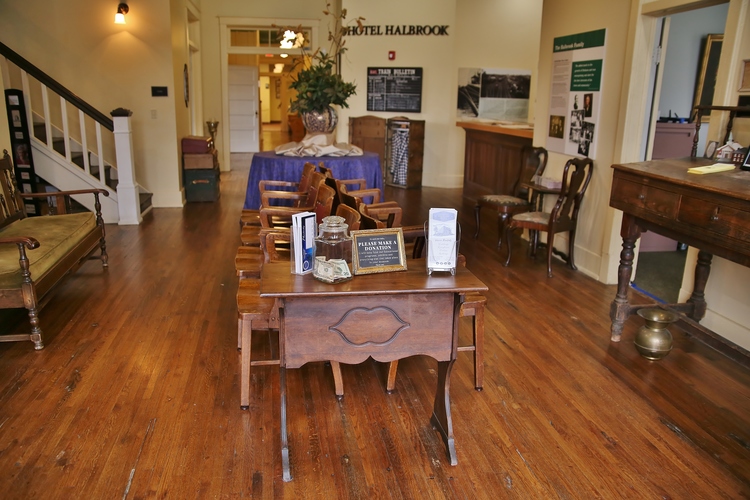 The lobby is furnished as a typical railroad hotel lobby would have been in the early 20th century and features a steamer trunk of the type used by travelers, along with seats and two spittoons. The large photo on the wall to the left of the registration desk shows the Dickson railyard as it looked at the NC & Saint L. picnic, July 4th, 1923.

The registration desk in the lobby is original to the hotel, as are the registration book: room key, and call bell. When a patron registered, he (and nearly all guests were males) would sign the book and indicate by L, D, or S which meals he would be taking. Breakfast was typically also included. If he paid for a bath, the desk clerk noted "bath" beside the guest's entry.

Also in the lobby is the bookkeeper's stand-up desk, dating from the end of the 19th century, which stood in the original frame depot located across the tracks from the hotel and later moved in the early 1920s.

When the hotel was renovated in the first decade of the 2000s, nearly all the hardwood floors were able to be restored, as well as all the metal ceiling tiles that are visible, with the exception of the dining room's, which had deteriorated too much to save.