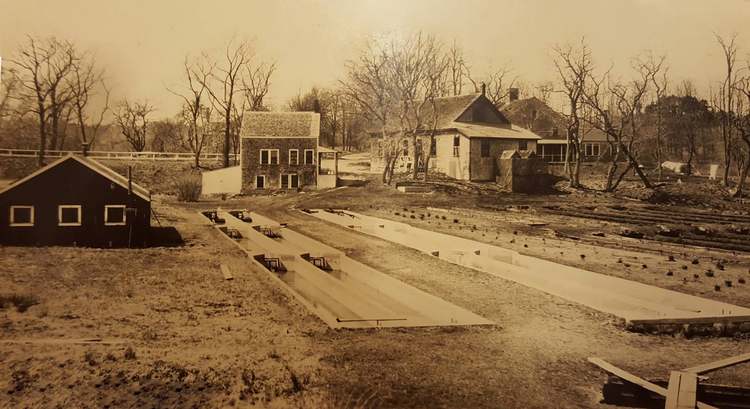 The building you are now looking at is a grist mill, a place where locally harvested grain was ground into flour. The building you see is actually the second mill to stand on this spot.

The first grist mill on this very spot was built by Benjamin Nye. Benjamin's mill has its origins in the early days of Sandwich.  The town was settled in 1637, and was fortunate to have had a grist mill built the next year by an entrepreneur named Thomas Dexter.  By the 1660s, however, the townspeople were unhappy with the increased toll, or payment in grain for grinding demanded by the miller, Thomas Dexter Jr.  Unable to reach an agreement, the town meeting voted to give a generous land grant to anyone who would build another mill.  Benjamin Nye built his competitive gristmill on this site and received the land grant. His family established a milling business that served the local community and became a fixture of public life. After operating for nearly two hundred years, Benjamin’s mill, decayed and delipidated, was taken down.

The mill you see now is the second grist mill on this site. It was built by Oliver Jones in 1858 on the Bumps River in Centerville, 8 miles away. It was moved here in 1889. Moving buildings was a very common practice. Imagine doing that today!

Next, carefully walk across the street toward the pond and the dam.